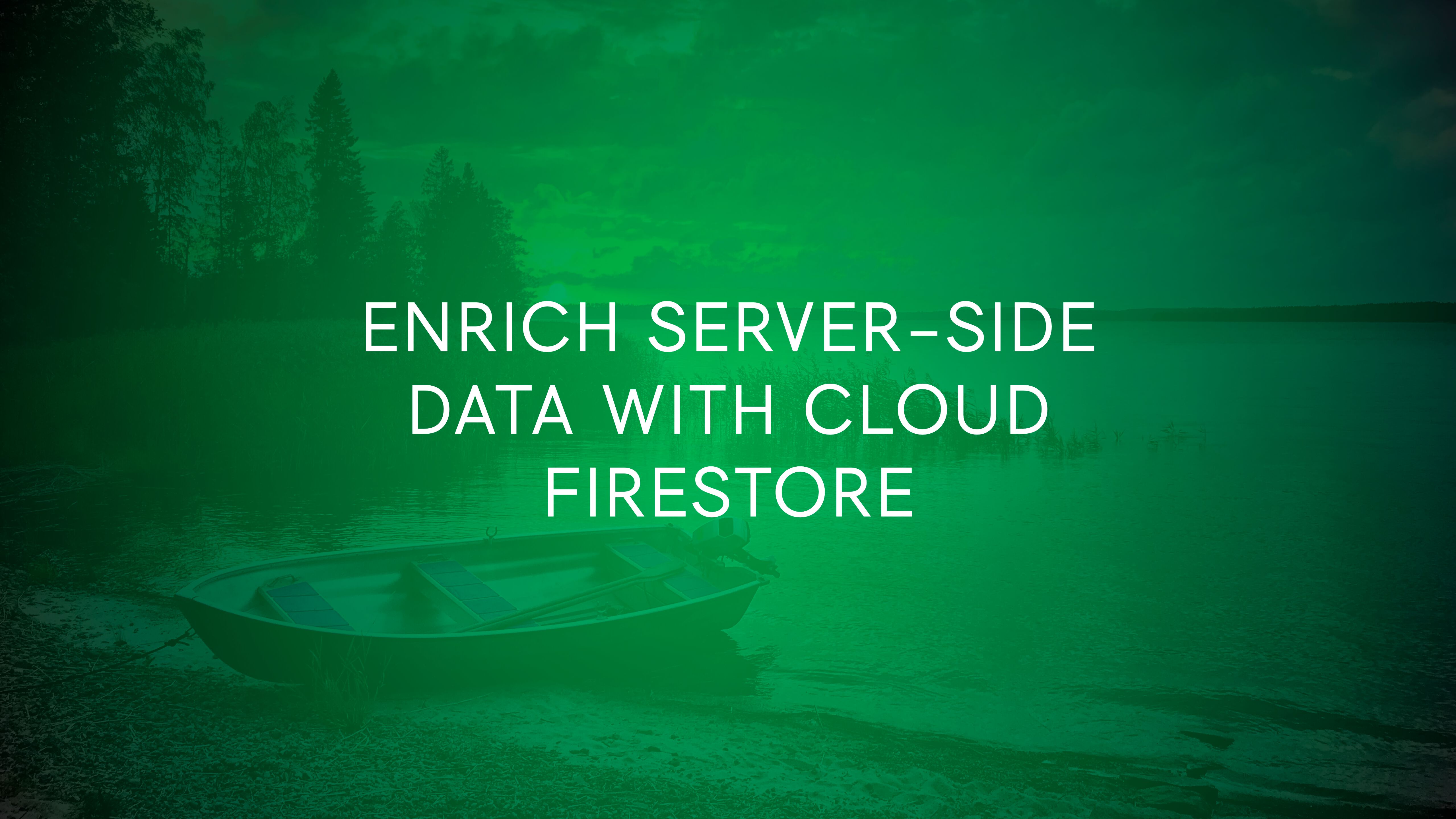 We have a new Google Cloud Platform API!

Firestore is a NoSQL, transactional, and scalable database that offers near-real-time write/read and sync operations for data.

In practice, it’s a great way to enrich and widen the data that you pass through your Server container.

Firestore stores data in documents, each contained within a collection.

As such, Firestore has great utility for widening the data streams in the Server container.

The incoming request can include a key, such as the transaction ID, and this key can then be used to query the Firestore for additional data. 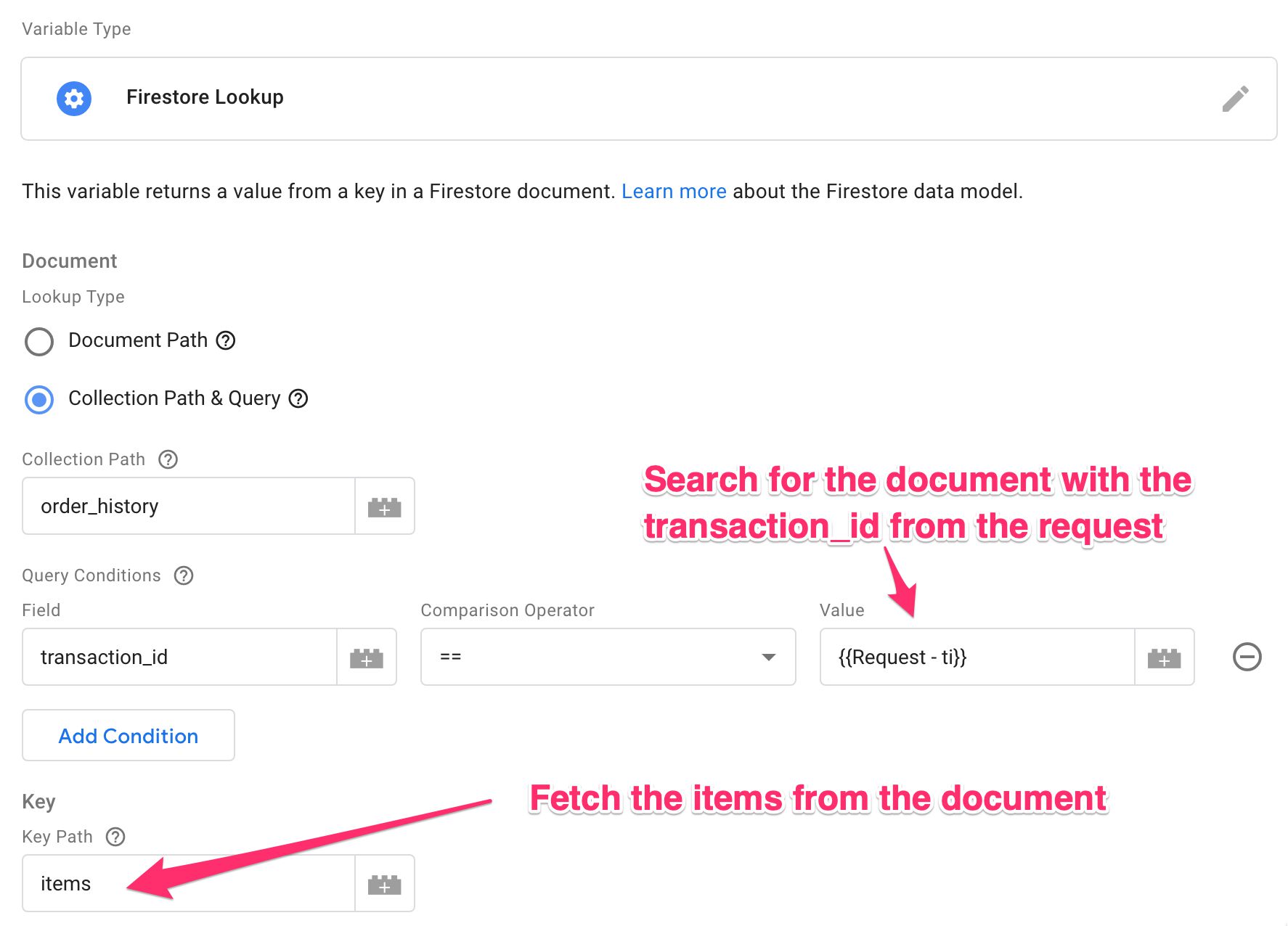 Thanks to the new asynchronous variables, this can all be done quite easily (see below for examples). 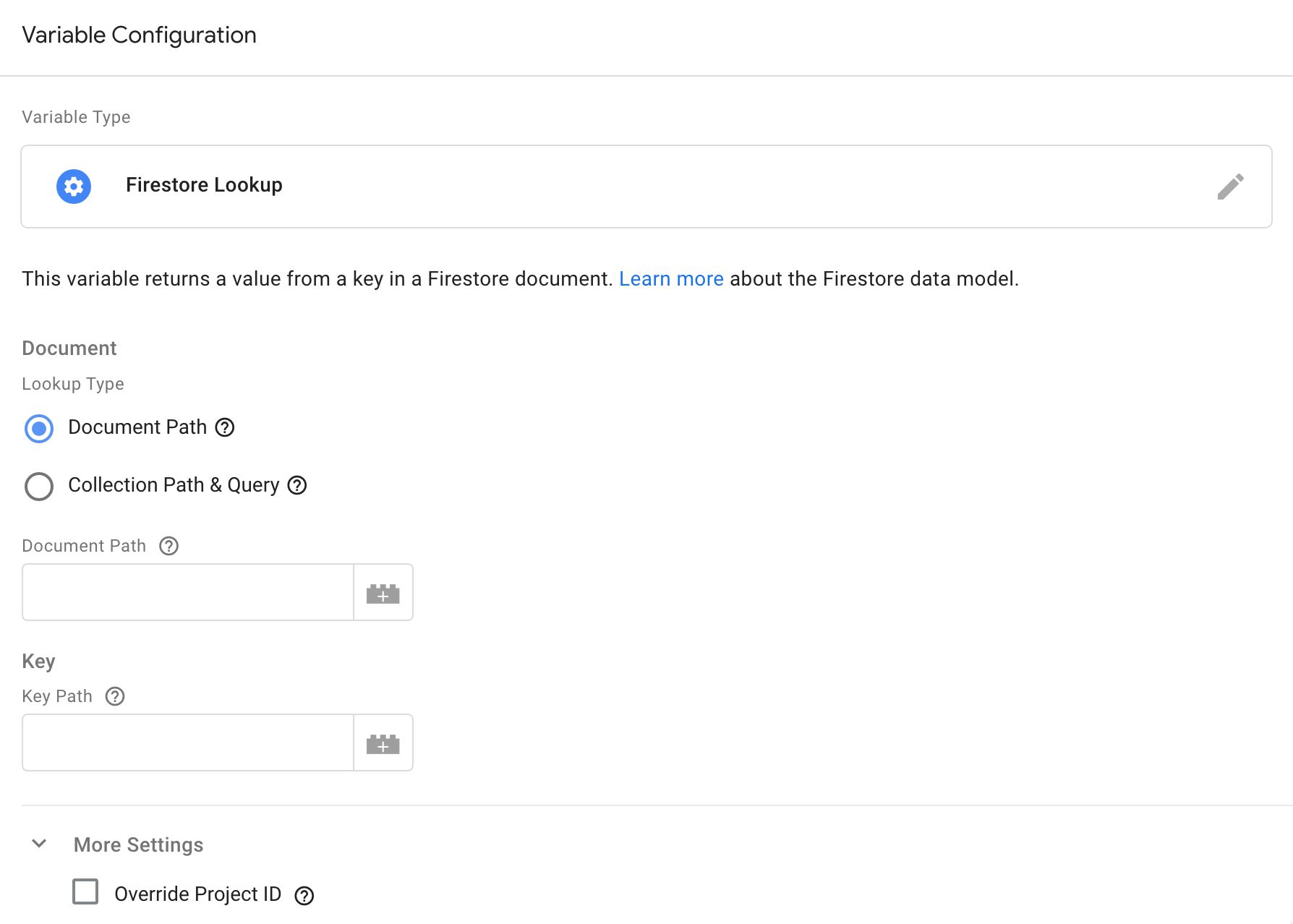 This variable lets you pull in the value from a specific key/field in a Firestore document.

The Lookup Type specifies how the correct document is retrieved. If you recall, Firestore nests all the relevant information within a document, which is hosted in a collection.

You can fetch the document directly using the full Document Path, or you can search for the document with Collection Path & Query.

Specifying the Document Path is the fastest method, because it’s a direct lookup to fetch a single document.

For example, to fetch the first document in the screenshot above, I would specify this as the Document Path:

Alternatively, if you can’t access the document directly with the path, you can also query it. You first need to provide a path to the collection that has the document. Then, you can add one or more query conditions using keys you know to exist in the document.

The query above would look for documents embedded within the user_database collection. The variable would fetch the first document that has the user_id field set to whatever is contained in the GTM {{User ID}} variable (could be something from the incoming request, for example) and has the user_status field set to something other than inactive.

Because Firestore indexes documents by default, query performance is proportional to the size of the result set and not the data set being queried. So it doesn’t matter how many documents there are in the collection for query performance, but it does matter how broad your query is (i.e. how many results it retrieves).

The Firestore variable uses the first document that matches the query for returning the key (see below). This is something to consider in case your query is too general and returns multiple (unrelated) documents.

Assuming the lookup returns a document, the Key Path then specifies which value to fetch.

Here’s a dummy example of a Firestore document: 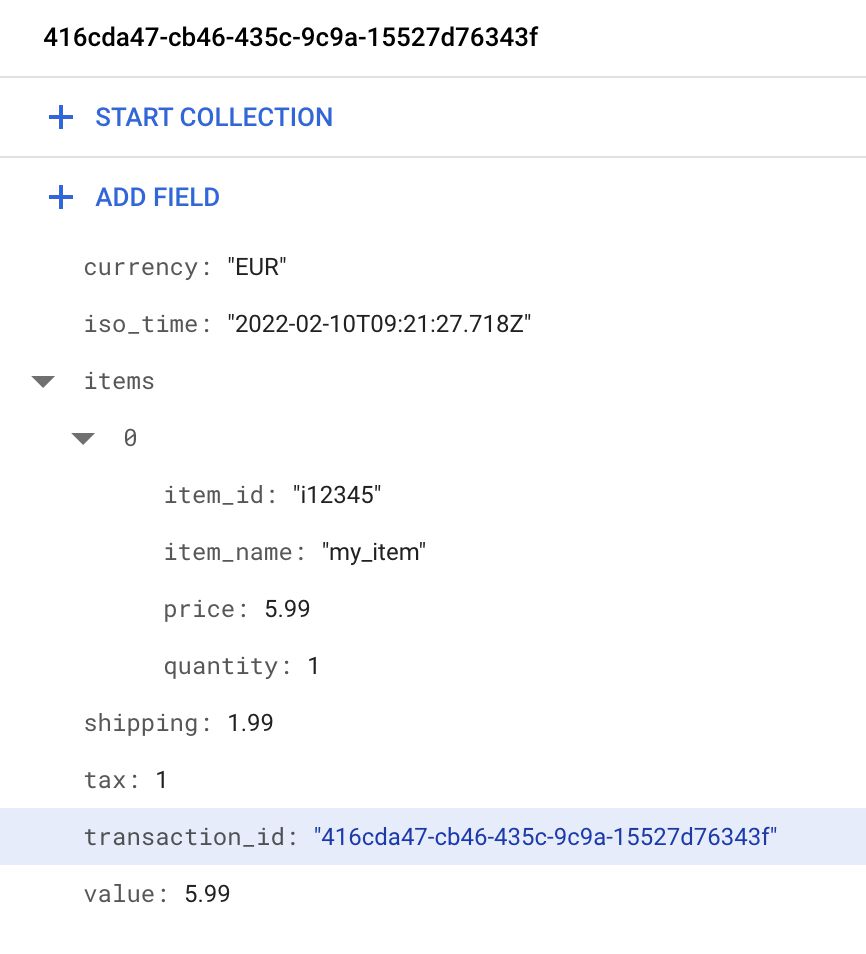 If no value is found, then the Default Value is returned if set, or undefined otherwise.

By default, the variable looks for collections and documents in the same Google Cloud Project that runs the GTM server.

If you want, you can override the Project ID and provide some other Google Cloud Project ID where the collection is stored.

To do this, expand More Settings in the tag and check Override Project ID.

If you provide another Project ID, you must add your GTM Server project service account to the Firestore project via IAM.

If you’re running your container on App Engine, locate the App Engine default service account in your GTM Server project IAM, and add it as a new role into your Firestore project.

If your container is running on Cloud Run, use the Compute Engine default service account instead.

Grant the service account a role of Cloud Datastore User to give the GTM Server access to the other project’s Firestore.

In this fictitious example, I’ll show you how you could use Firestore to widen an incoming Google Analytics 4 data stream. 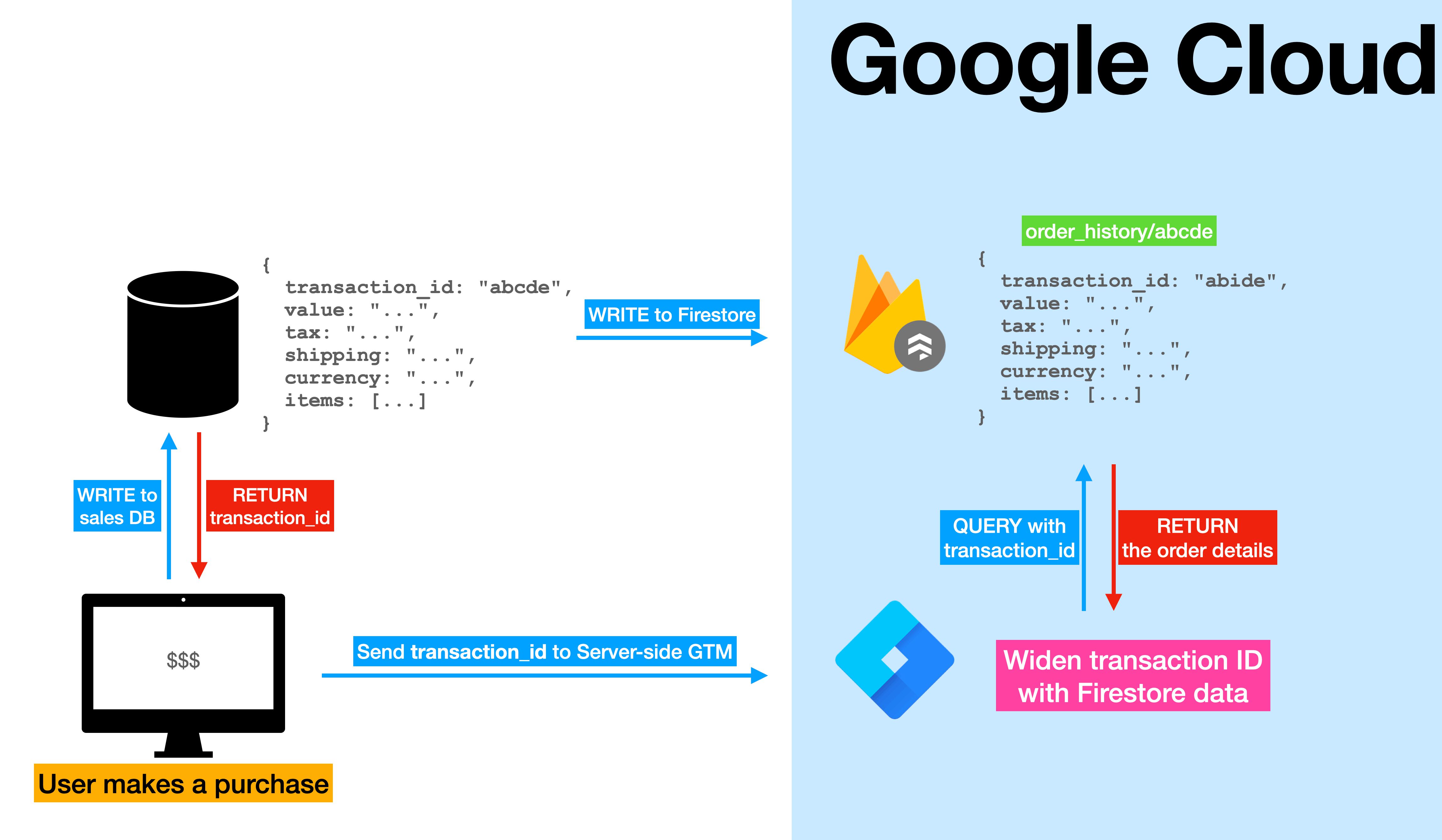 As you can see from the immaculately designed process flow above, there are several moving parts in this setup.

Because this is a made-up example, I’m going to skip steps 1–3. It’s a bit of a cop-out because engineering the data flow from the sales engine to Firestore isn’t trivial to do. It has to happen immediately to avoid latency and potential race conditions, where the server container tries to query for data that doesn’t (yet) exist.

In Firestore, the collection ends up looking like this:

There’s a collection called order_history, under which each transaction is its own, unique document. I’m using the Transaction ID as the name of each document to make the lookup easier.

Each transaction document has the following fields. I’ve chosen these fields and these types to require as little transformation in the Server container as possible. Thus, the fields and the values follow closely what GA4’s ecommerce schema expects.

In server-side GTM, I’ve got a Google Analytics 4 event tag set to fire when the event with the Transaction ID comes in.

The Transaction ID is sent as a custom event parameter with the name custom_ti. Thus, I can create a Query Parameter variable for it like this:

This variable returns the value of the &ep.custom_ti parameter in the incoming GA4 request.

My Google Analytics 4 tag in the Server container then looks like this: 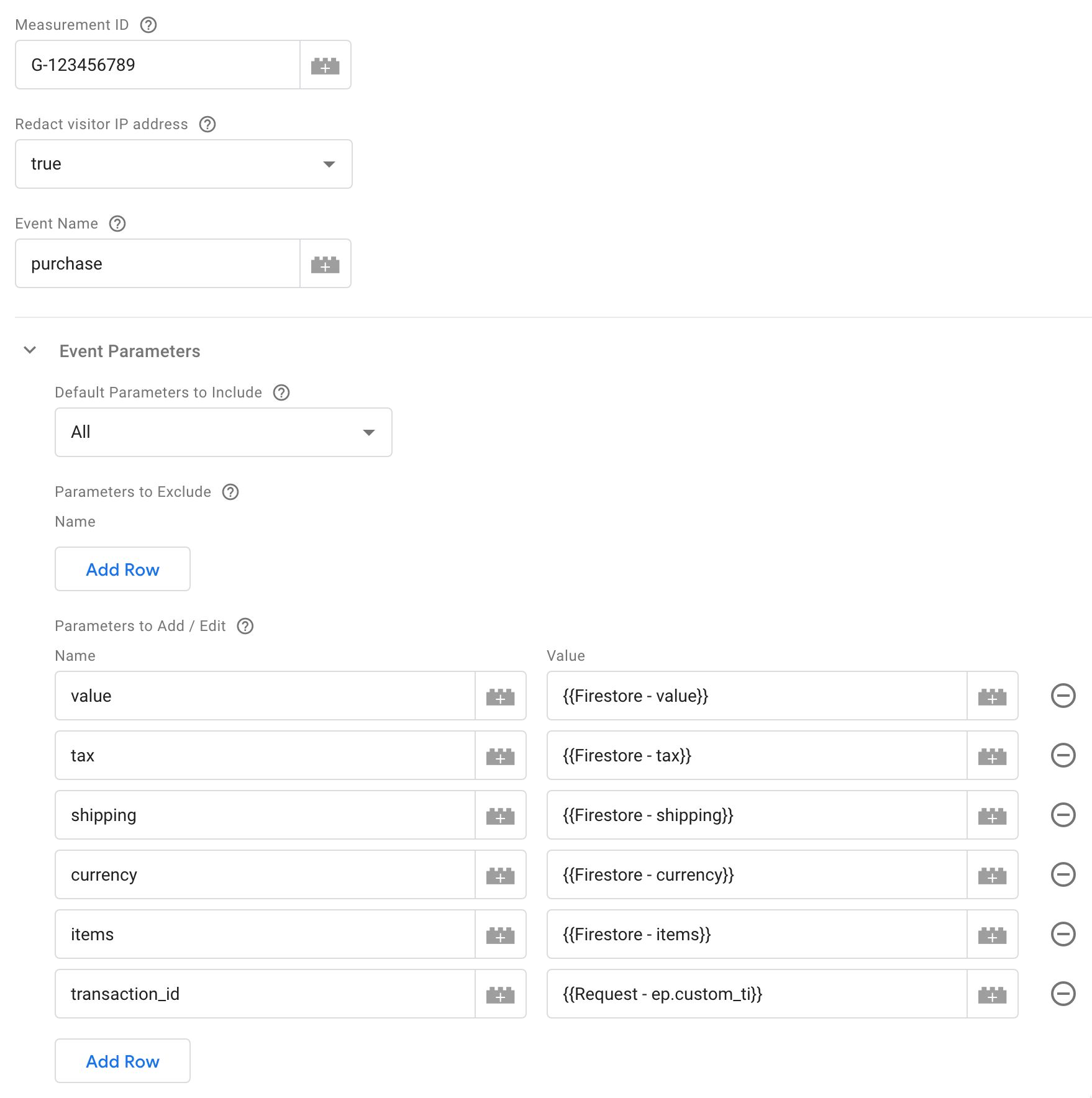 Here, you can see that I hard-code the event name as purchase. Then, all the fields that GA4 expects to be included in a Purchase hit are added to the tag.

The transaction_id is set to point to the custom parameter in the incoming request, and all the other fields are Firestore variables.

Each Firestore variable points to the relevant key in the order document. Here’s how the variables are configured:

As you can see, I’m using the {{Request - ep.custom_ti}} variable (which takes the Transaction ID from the request URL) to establish the Document Path (with the order_history collection name hard-coded).

This is why I set the Transaction ID as the document name when creating the Firestore collection. I can do direct lookups rather than having to make queries.

If I did want to make a query, this is how I could fetch the correct document:

This would fetch the first document that has the transaction_id field with the same value as the ep.custom_ti parameter in the incoming request.

When testing this, I’ll first need to check that the incoming request looks good:

Yes, there’s our ep.custom_ti parameter! The event name is custom_purchase but this is irrelevant because we hard-code it to purchase in the Server container.

Now, let’s take a look at all the outgoing network calls that the Server container makes when the incoming request is processed:

Uhh, that’s quite a few Firestore calls. Well, there’s one for each key that is fetched from Firestore. Luckily they all return 200 status.

I’ll then select the custom_purchase event and check what my variables return.

Looking very good! All of the variables have values, and these values match what was written into the Firebase document. 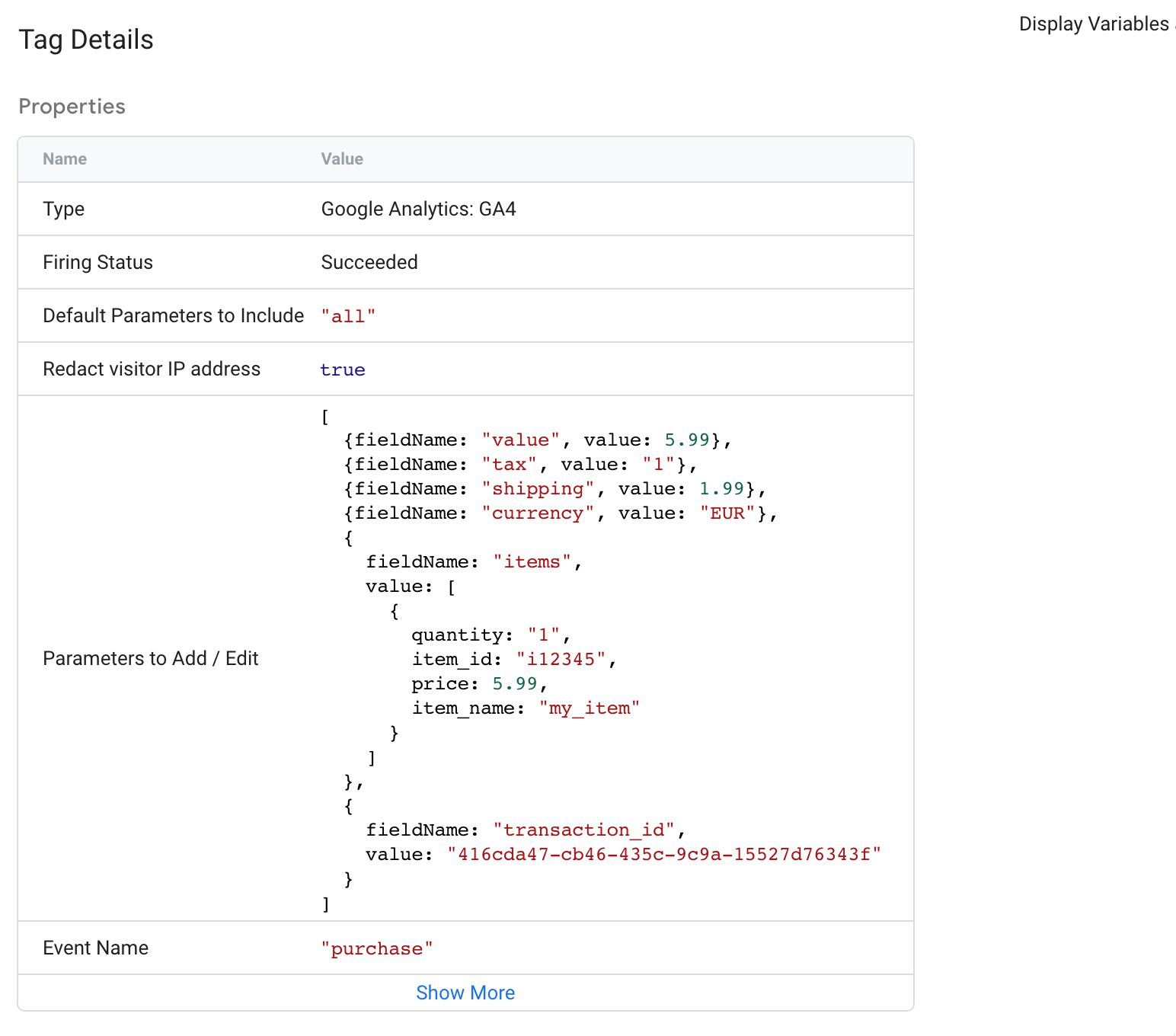 Yes! All the fields are set correctly. OK, let’s quickly peek at the outbound request, too. 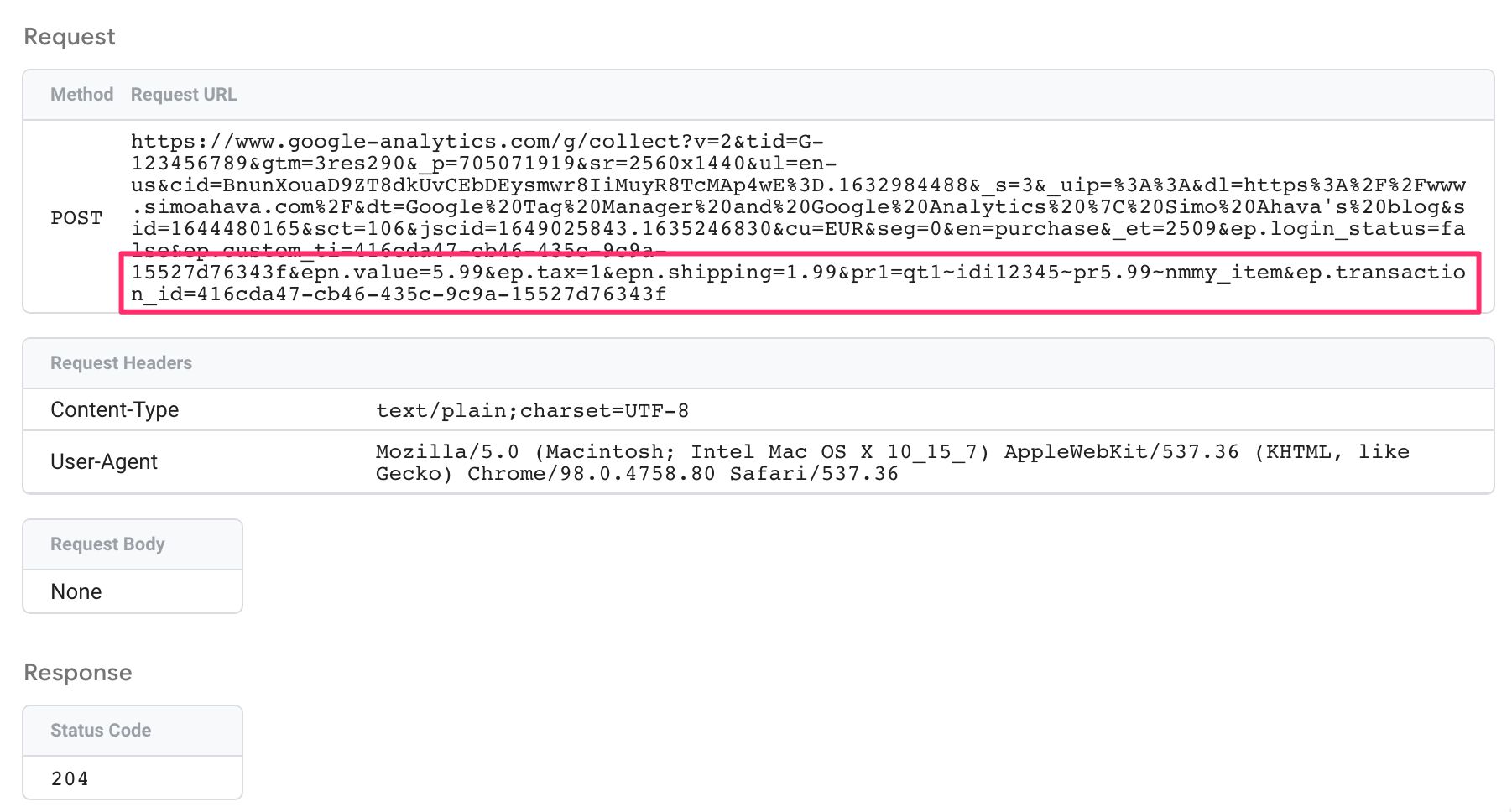 And there you have it. If you recall, I only sent the transaction ID to the server. It was widened with data from the Firestore document, and the final request to Google servers was formatted as a proper purchase event.

This all was done without having to create any custom Client, tag, or variable templates.

Obviously, this isn’t the most useful example, because typically you’d include the transaction data already in the client. But as an example of how data widening works, I think it’s a pretty nifty setup.

In addition to the Firestore variable, a new template API, Firestore, has been released. All its methods are Promise-friendly, of course.

As an example, here’s what a Firestore.query call would look like:

This queries the collection users for a document (one, because limit is 1), which has the user_id key set to admin and the country key set to FI.

If successful, an array of matching documents (again, just one) is returned by the callback.

Note that for this to work in a variable, the API call itself must be returned (return Firestore.query...), as it returns a Promise that GTM’s runtime code will then handle appropriately.

runTransaction might sound confusing, but it’s a useful way of having a set of write operations immediately following a related set of read operations. This is handy if the write requires an input from the read. The atomicity refers to the fact that either all operations are a success or all operations fail. In case of failure, up to two retries are automatically done. If three total attempts fail, the API rejects the Promise with an error.

Transactions are a way of protecting your read-write setups from other, concurrent write operations. For example, while reading the data from a Firestore document, if some other process modifies this data, then the transaction automatically starts over to ensure that it runs on the most recent and up-to-date data.

Read more about these APIs here.

Firestore might be more obscure for “casual” Google Tag Manager users, at least when compared to something like Google BigQuery.

However, while BigQuery is a great data warehouse, it’s not a transactional database, as its read operations can’t handle the type of low latency and cost that a NoSQL, real-time database like Firestore can.

The opportunities for enriching data are limitless. Naturally, you need to have a plan in place for populating those Firestore documents, but for data widening purposes you could do things like…

I’m excited at having another, extremely useful Google Cloud API to play with in the Server container.

What do you think about Firestore? Can you think of other, cool use cases for the API?