Holy visibility, Batman! Visibility is a seriously undervalued aspect of web analytics tracking. Too often, we fall into the trap of thinking that “Page Views” actually have something to do with “viewing” a page. Or that tracking scrolling to 25%, 50%, or 75% of vastly different pages makes sense on the aggregate level. So you will be very pleased to know that the Google Tag Manager team (who have been on FIRE recently), have just published the Element Visibility trigger. And oh BOY what a trigger it is! 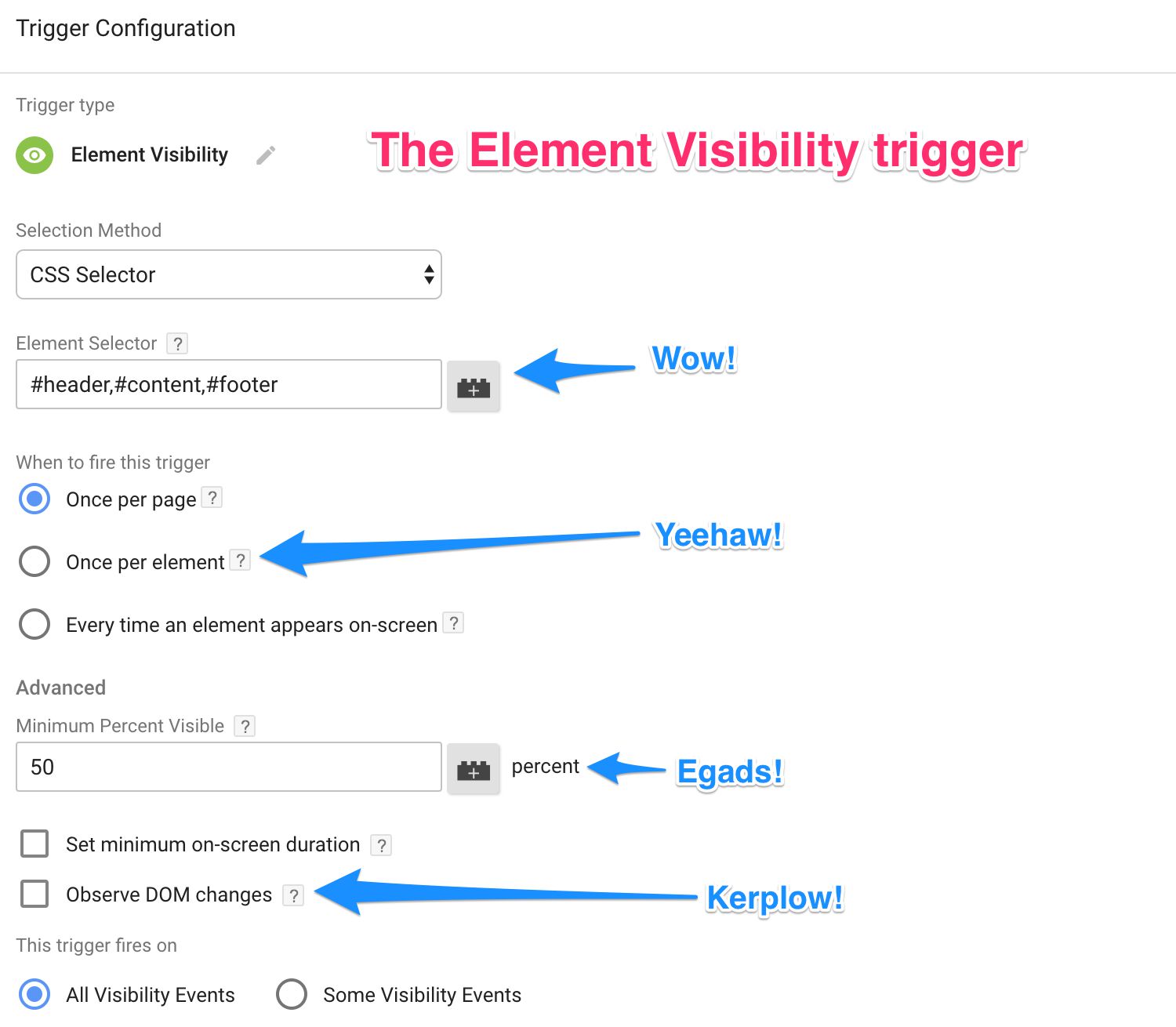 It’s a very impressive trigger. Not only does it let you do some proper scroll tracking (track to elements, not percentages), but it also includes a feature that lets you track changes in the DOM. This has typically been quite difficult to track purely client-side, so having the feature natively in Google Tag Manager is very cool. On top of that, you can actually measure true view impressions (impressions for items that are visible to the user) AND combine that with the actual time the element was viewed for.

In short, the Element Visibility trigger fires whenever an element, or elements, you specify appear in the browser’s viewport. The viewport is the visible area of the browser window, meaning if an element is visible there, it is viewable by the user. 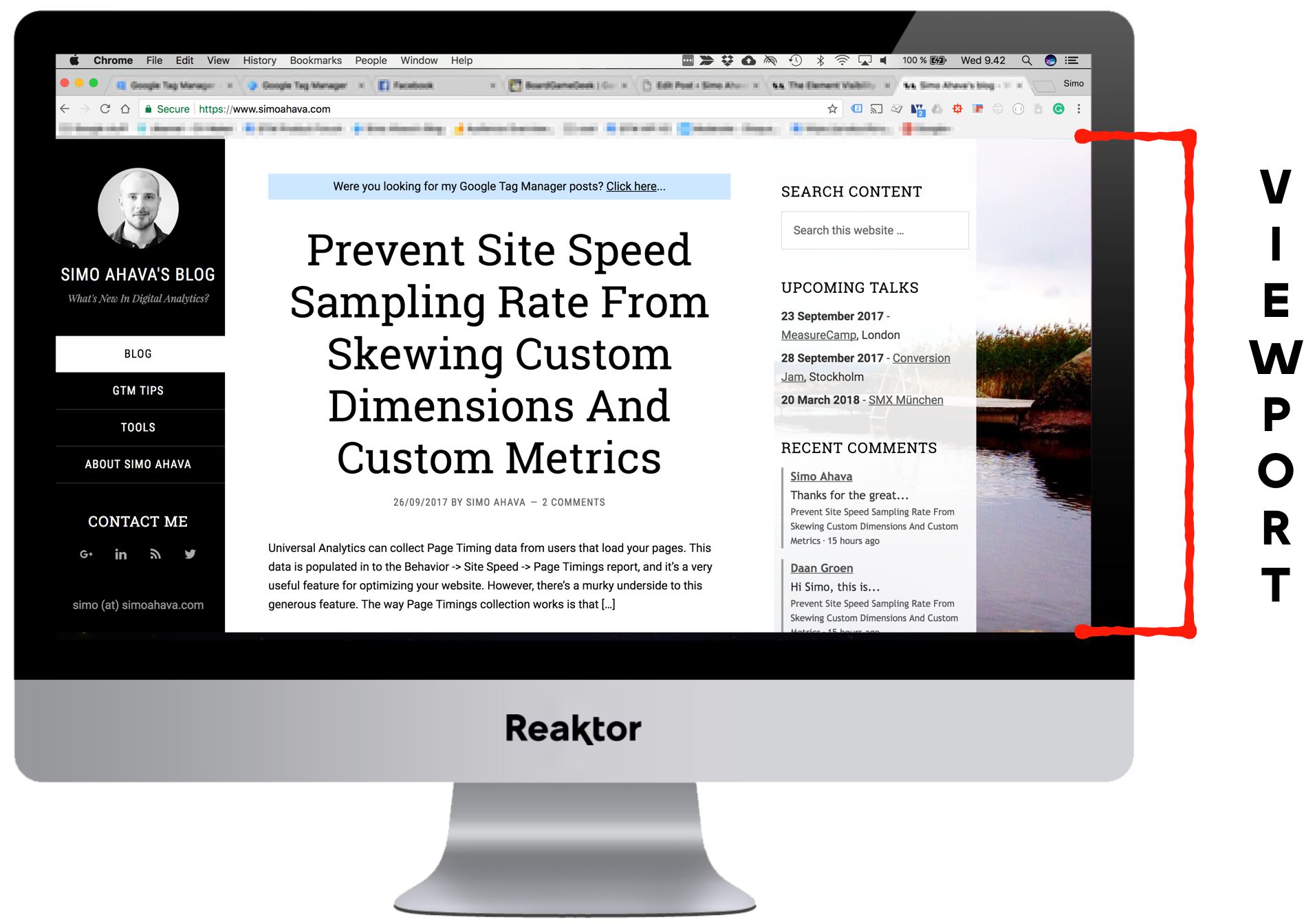 With this in mind, let’s jump straight to the features.

You have two options here - element ID and CSS Selector. The former uses document.getElementById to match the first element in the page with the given ID. The latter uses CSS Selectors to match the element or a group of elements on the page. 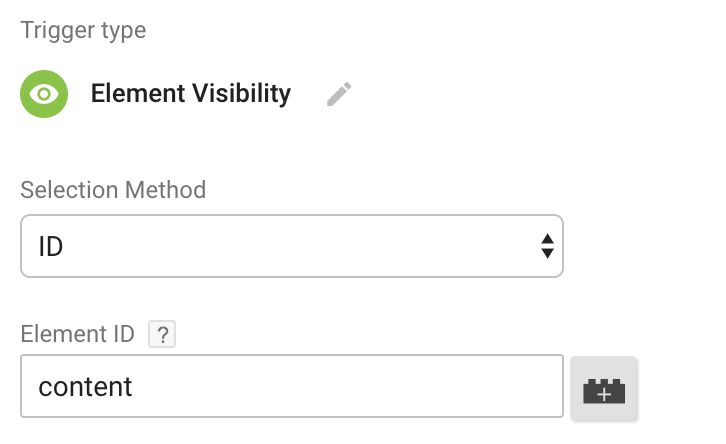 At this point I really recommend you read up on CSS selectors (see also my article on the topic). They really make Google Tag Manager more than just the sum of its parts.

The obvious difference between the two is that you can add multiple element selectors into the CSS selector string. For example, if I want to track when the header, the article title, the article body, and the article footer enter the viewport, I could use something like this as the selector:

The trigger could then fire when each one of these enters the viewport (see below).

The ID selector, on the other hand, performs better if you have only one element to track.

When to fire this trigger

This is where you’ll govern what this trigger actually is. Is it a check to see if a certain element is in the viewport when the page is loaded, or is it an advanced scroll trigger?

Of these, I wager the first two will be most used. Tracking if an element is visible is very useful for e.g. true view impression tracking, and tracking when multiple different elements appear can be used to create an advanced scroll trigger. There might be use cases for the last option too, though.

This is a great way to make sure that enough of the ad or content piece is visible for you to interpret the data as meaningful.

In this field, you can specify the total time in milliseconds the element must be visible in the viewport for the trigger to fire. Note that this is cumulative, so let’s say you have the following setting: 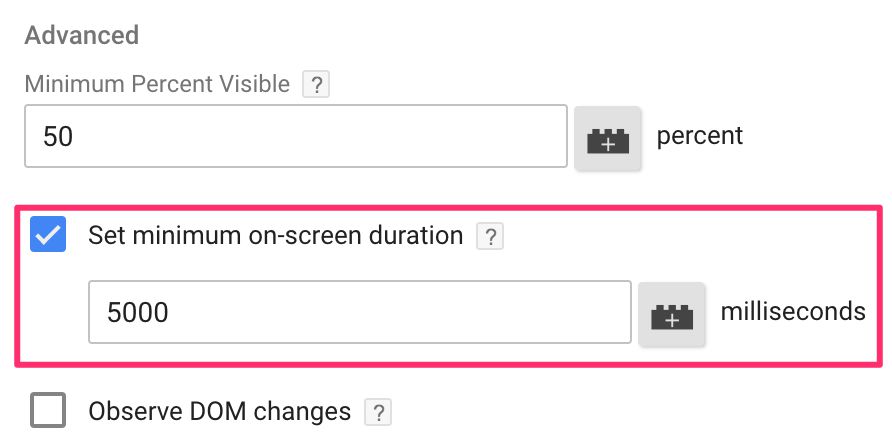 Note that because GTM has to manage a timer for each element that you want to monitor, tracking a single element with the Element ID selection method performs better than a bunch of elements defined with CSS selectors.

This setting lets you track the visibility of elements that might not exist in the DOM when the page first loads! In other words, if you have dynamically inserted elements, you can check this box to track when they become visible, too.

The most obvious use case is if you have a form which is resilient to GTM’s Form Trigger due to complications in the on-site JavaScript, you can use this trigger setting to wait for an HTML element with the thank you message to pop up. So something like this: 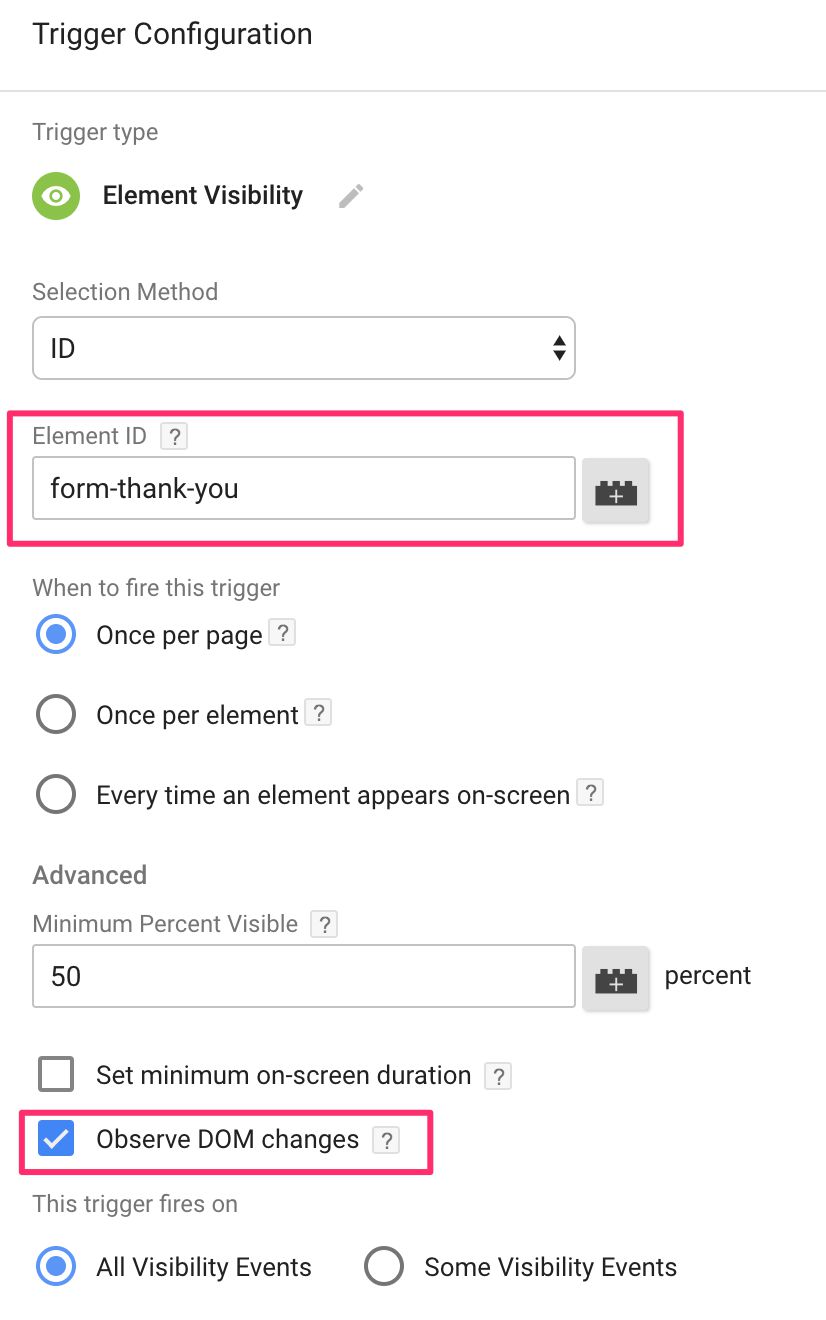 Now the trigger will fire when an element with the ID #form-thank-you becomes visible, even if it’s dynamically inserted into the Document Object Model!

Similar to tracking On-Screen Duration, the DOM Changes setting performs better when you track a single element with the Element ID selection method.

When the visibility trigger fires, an event with the name gtm.elementVisibility is pushed into Data Layer. The object has a number of variables you can refer to using Built-in Variables (or Data Layer Variables if you want to configure them manually).

You can use these variables (preferable as Built-in Variables) to create even more advanced configurations in your other tags, triggers, and variables.

There are some new built-in variables introduced, too: 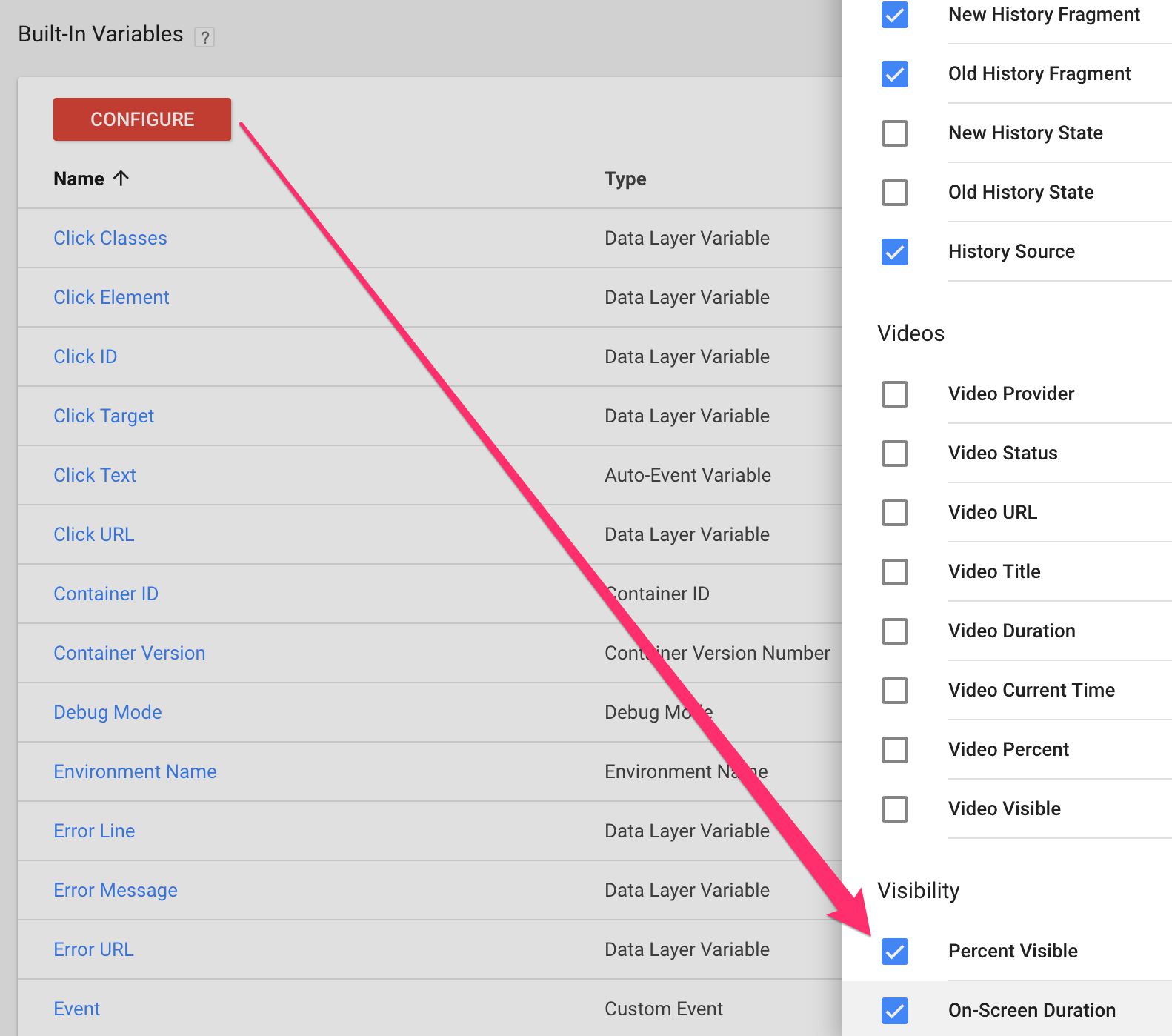 The past month or two have been crazy in Google Tag Manager land. Features that we’ve been dying to see have been released with impressive speed and attention to detail.

Out of the bunch, I think this new Element Visibility is my favorite one. It has the potential to turn your entire web analytics tracking around, since you can actually focus on tracking interactions that matter rather than interactions that simply take place. Visibility is such a huge aspect of things we do on a web page. If an element is not visible, it can’t really be engaged with by a user.