Scroll depth tracking in web analytics is one of those things you simply must do, especially if you have a content-heavy site. Tracking scroll depth not only gives you an indication of how much users are digesting your content, but it also lets you turn meaningless metrics such as Bounce Rate into something far more useful. 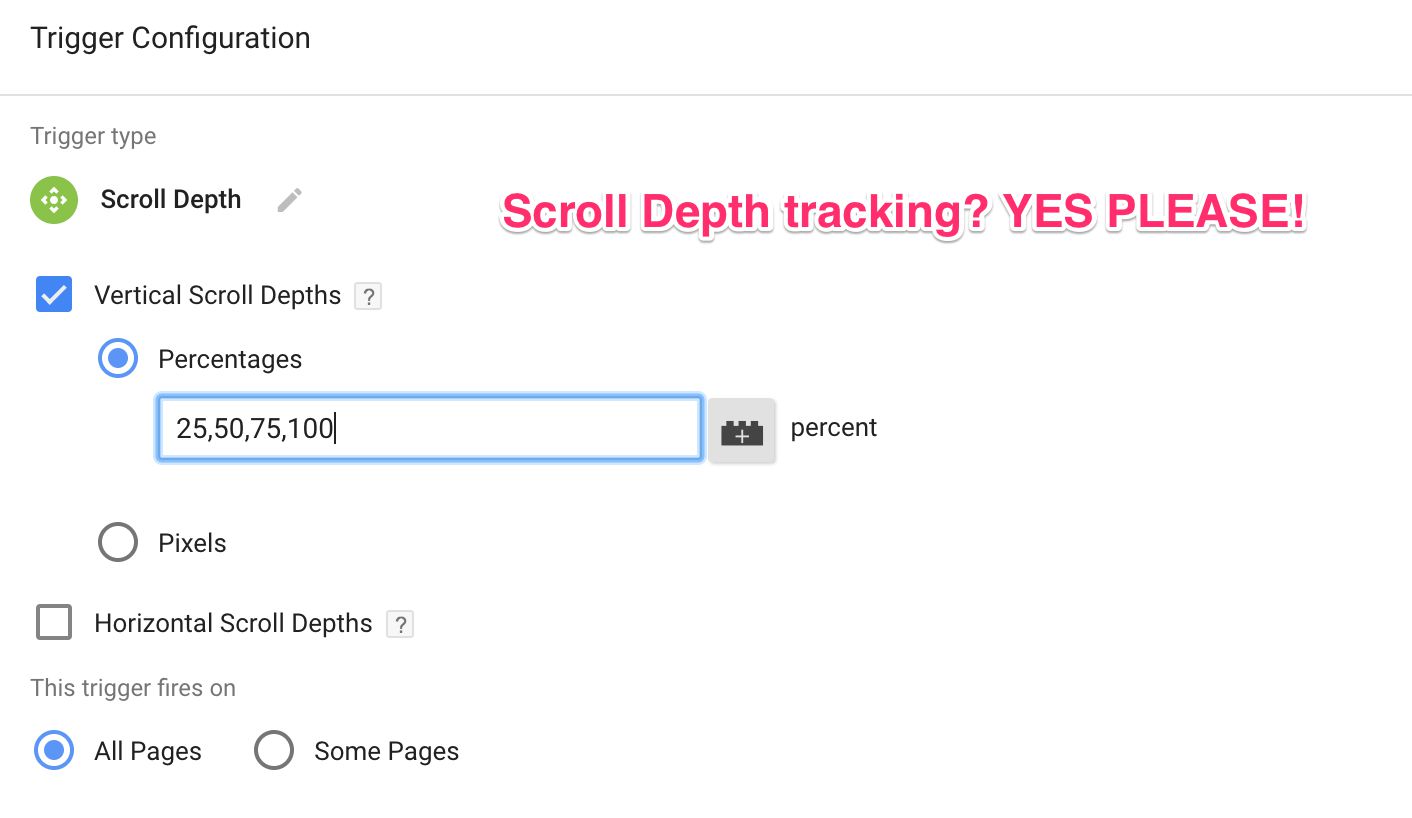 The new trigger comes with all the base features you’d expect in a scroll depth tracking plugin. There’s no option to track scrolling to specific HTML elements, but luckily the recently released Element Visibility trigger takes care of this.

You can find the trigger in the Google Tag Manager user interface, by navigating to Triggers, clicking the NEW button, and selecting the Scroll Depth trigger template from the list.

When you create the trigger, you’ll see the following configurable options:

You might want to delimit the trigger to collect data only on content pages, which is where the Some pages option will come useful: 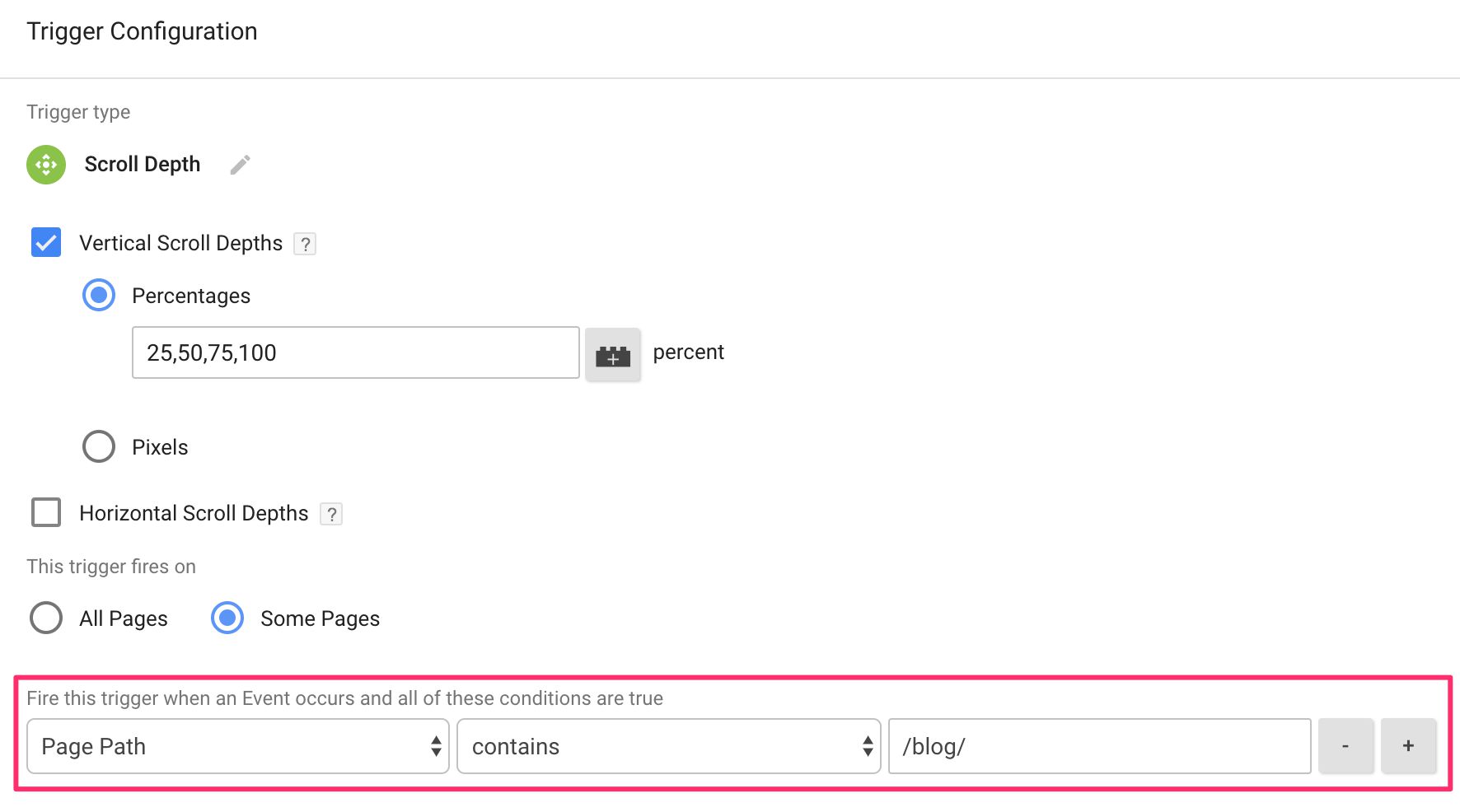 That’s it for the configuration.

How to use the trigger

It’s a good idea to use the Preview mode for this. Set the trigger up with e.g. 25% thresholds (as in the image at the beginning of this article), visit a page on your site, and scroll some. You’ll see the following Data Layer object pushed when you reach a scroll threshold: 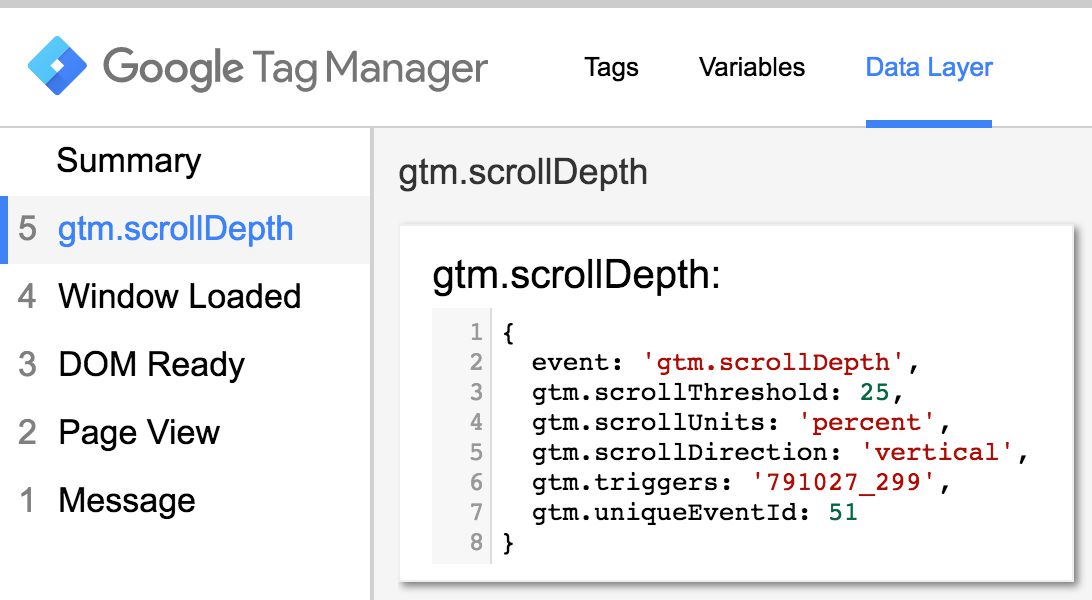 Here are the relevant Data Layer variables that are created: 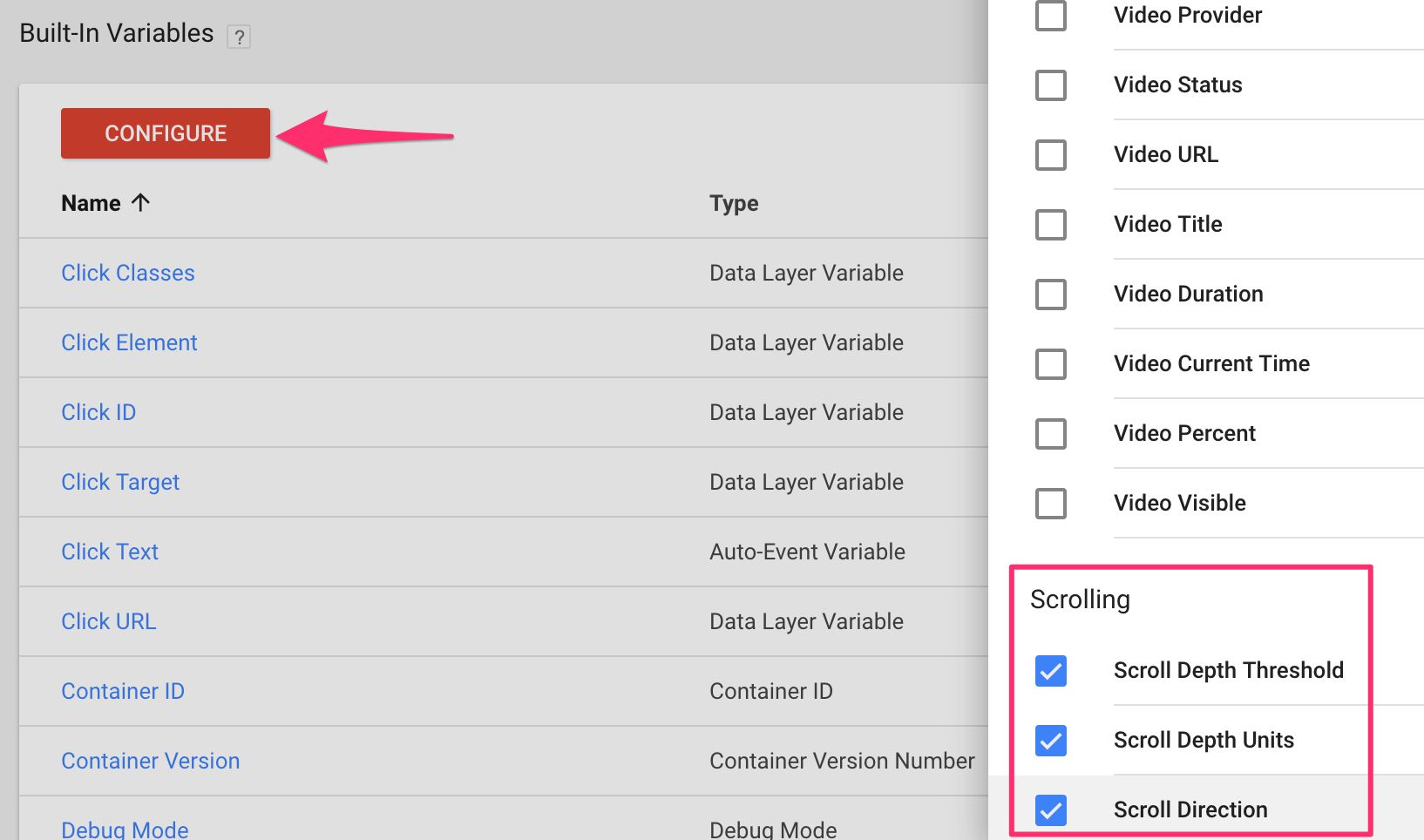 You’ll find the new Built-in Variables by navigating to Variables in the Google Tag Manager user interface, and clicking CONFIGURE under the “Built-In Variables” heading.

With this information, it will be easy to setup a Google Analytics Event tag to collect your scroll tracking data. For example, the following tag fires for each 25% of page scrolled.

You can even configure the “Non-Interaction” field to be true for the 25% mark, and false for the rest. This will make sure that your site’s Bounce Rate isn’t affected by minimal scroll. The Custom JavaScript variable you’d use in the Non-Interaction field would look like this:

This returns true if the user crossed the 25% mark, and false otherwise.

You need to be mindful of one thing when working with a scroll depth tracking plugin. If you load the page so that you are on or have crossed any one of the defined thresholds, the gtm.scrollDepth trigger will automatically fire for all the thresholds you have crossed.

This might have an impact on your data collection, so you just need to be mindful of this. This is also one reason why it’s a good idea to have the first threshold as non-interactive, because if the page is very short, it’s possible the trigger will fire even if the user didn’t scroll one bit.

The scroll depth trigger now offered by Google Tag Manager natively works very nicely, and checks most of the boxes you’d expect in such a plugin.

If you want to track scrolling to specific elements, be sure to check out the Element Visibility trigger!

One thing that is questionable is how well this jives with a single-page app. When you transition from one page to the other, any scroll tracking trigger that was active on the previous page would still be active, and thus the depth tracker would not reset to accommodate scrolling on the new, dynamically loaded content. It remains to be seen if the plugin will support somehow “resetting” it for single-page transitions.

What do you think of this release? Does this make the alternatives out there obsolete, or do you think this new trigger is desperately in need of some additional features?