In my intense love affair with the Google Cloud Platform, I’ve never felt more inspired to write content and try things out. After starting with a Snowplow Analytics setup guide, and continuing with a Lighthouse audit automation tutorial, I’m going to show you yet another cool thing you can do with GCP. 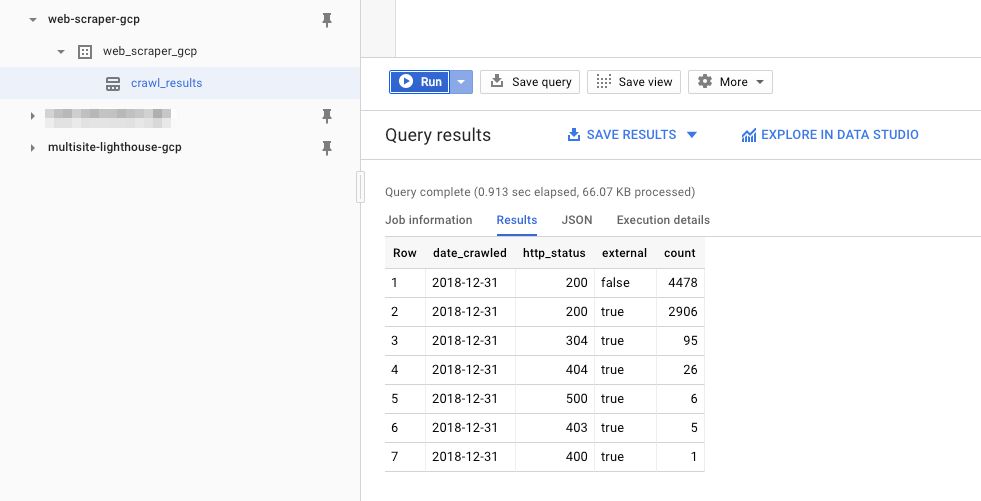 In this guide, I’ll show you how to use an open-source web crawler running in a Google Compute Engine virtual machine (VM) instance to scrape all the internal and external links of a given domain, and write the results into a BigQuery table. With this setup, you can audit and monitor the links in any website, looking for bad status codes or missing titles, and fix them to improve your site’s logical architecture.

The idea is fairly simple. You’re using a Google Compute Engine VM instance to run the crawler script. The purpose here is that you can scale the instance up as much as you like (and can afford) to get the extra power you might not have with your local machine.

The crawler runs through the pages of the domain you specify in the configuration, and writes the results into a BigQuery table.

You could even create a Google Cloud Function that starts the instance with a trigger (an HTTP request or a Pub/Sub message, for example). There are many ways to skin this cat, too!

The configuration also has a setting for utilizing a Redis cache by way of GCP Memorystore, for example. The cache is useful if you have a huuuuuuge domain to crawl and you want to be able to pause/resume the crawl, or even utilize more than one VM instance to do the crawl.

The cost of running this setup really depends on how big the crawl is and how much power you dedicate to the VM instance.

On my own site, the ~7500 links and images being crawled take about 10 minutes on a 16 CPU, 60 GB instance (without Redis) VM instance. This translates to around 50 cents per crawl. I could scale down the instance for a lower cost, and I’m sure there are other ways of optimizing it, too.

The preparations are almost the same as in my earlier articles, but with some simplifications.

To verify you have these up and running, run the following commands in your terminal:

Set up a new Google Cloud Platform project with Billing

Follow the steps here, and make sure you write down the Project ID since you’ll need it in a number of places. I’ll use my example of web-scraper-gcp in this guide.

Clone the Github repo and edit the configuration

Before getting things up and running in GCP, you’ll need to create a configuration file first.

The easiest way to access the necessary files is to clone the Github repo for this project.

Next, run the command mv config.json.sample config.json while in the web-scraper-gcp/ directory.

Finally, open the file config.json for editing in your favorite text editor. Here’s what the sample file looks like:

Here’s an explanation of what the fields are and what you’ll need to do.

Once you’ve edited the configuration, you’ll need to upload it to a Google Cloud Storage bucket.

Upload the configuration to GCS

Browse to https://console.cloud.google.com/storage/browser and make sure you have the correct project selected.

Next, create a new bucket in a region nearby, and give it an easy-to-remember name. 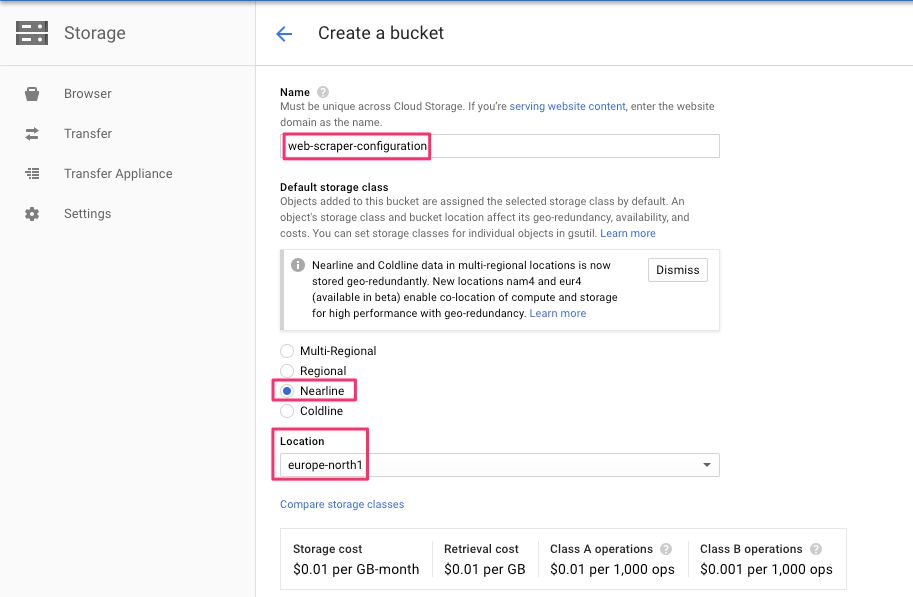 Once done, enter the bucket, choose Upload files, and locate the config.json file from your local computer and upload it into the bucket.

The Git repo you downloaded comes with a file named gce-install.sh. This script will be used to fire up the VM instance with the correct settings (and it will initiate the crawl when started). However, you’ll need to edit the file so that it knows where to fetch your configuration file from. So, open the gce-install.sh file for editing.

Change the web-scraper-config part to the name of the bucket you just created. So if you named the bucket my-configuration-bucket, you’d change the line to this:

Final preparatory step is to make sure you have the required services enabled in Google Cloud Platform.

Now you’re ready to create the Google Compute Engine instance, firing it up with your install script. Here’s what’s going to happen when you do so:

To create the instance, you’ll need to run this command:

Check to see if it works

First, head on over to the instance list, and make sure you see the instance running (you should see a green checkmark next to it):

Naturally, the fact that it’s running doesn’t really tell you much, yet.

Next, head on over to BigQuery. You should see your project in the navigator, so click it open. Under the project, you should see a dataset and a table.

If you see them, the next step is to run a simple query in the query editor. Click the table name in the navigator, and then click the QUERY TABLE link. The Query editor should be pre-filled with a table query, so between the SELECT and FROM keywords, type: count(*). This is what the query should end up looking like:

This will run the query against the BigQuery table. The crawl is still probably running, but thanks to streaming inserts it is constantly adding rows to the table. The query should return a result that shows you how many rows there are in the table currently:

If you see a result, it means the whole thing is working! Keep on monitoring the size of the table. Once the crawl finishes, the virtual machine instance will shut down, and you’ll be able to see it in its stopped state.

First of all, this was an exercise. I’m fully aware of awesome crawling tools such as Screaming Frog, which you can use to achieve very much the same thing.

However, this setup has some cool features:

Anyway, I didn’t set out to create a tool that replaces some of the stuff already out there. Instead, I wanted to show you how easy it is to run scripts and perform tasks in the Google Cloud.

Let me know in the comments if you’re having trouble with this setup! I’m happy to see where the problem might lie.