#GTMTips: Fetch The Latest Value Of A Data Layer Variable

However, there are situations where this is not a good thing. One is tag sequencing, and the other is a scenario where you want to run some custom code that should access the latest value of the Data Layer variable at a moment in time after the tag has already fired. Read on for an example!

Tip 98: Access the latest value of a Data Layer variable 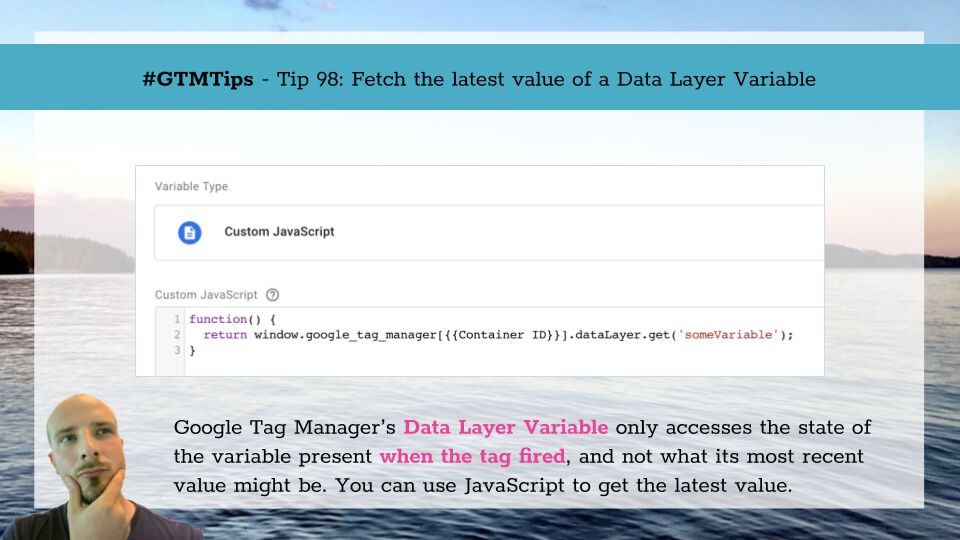 For example, let’s say your site has a custom event listener built to detect when the user is about to leave a page (using the beforeunload custom event). However, you only want to send that event if the user is logged out, for some obscure reason.

This is what your first attempt might look like. It’s a Custom HTML tag set to fire when the page is first loaded with the All Pages trigger.

Now, when the Custom HTML tag fires, the beforeunload listener is created, and the {{DLV - loginStatus}} variable is resolved to whatever value it had when the tag fired.

Then, when the user is about to leave the page by closing the browser or clicking a link, the beforeunload callback is executed, and it checks if this original state of loginStatus is “logged-out”, in which case it runs the dataLayer.push().

Do you see the problem here? The beforeunload event is not fired until the user tries to leave the page, but the {{DLV - loginStatus}} is resolved to whatever value it had when the tag itself was initially run. If the loginStatus changes while the user is on the page, it wouldn’t make a difference. The initial value is what’s used in the if... condition, meaning you’ll risk losing valid hits because of that.

So we need a mechanism that fetches the value of the Data Layer variable when the relevant code is run. We want the if... condition to evaluate against what the value of loginStatus is at the time of the beforeunload event and not when the tag is first run.

For this, we use a JavaScript method that is built into Google Tag Manager and allows us to do exactly this.

Remember to enable the Container ID built-in variable for this.

This method polls GTM’s internal data model and fetches the latest value of the variableNameHere Data Layer variable. So, to modify the original example, here’s what you end up with:

Now the if... condition checks what the latest value of loginStatus is, and it will work nicely if the status has changed while the user is on the current page.

It’s a simple trick, but can come in handy when working with GTM’s idiosyncractic way of freezing the variable state for the duration of each trigger event.