The Scroll Depth trigger in Google Tag Manager has a lot going for it. Tracking how far users scroll down a given page has long since been recognized as an important cog in the engagement tracking machine, and there have been really great solutions for implementing scroll depth tracking for web analytics over the years.

With Google Tag Manager’s native Scroll Depth trigger, it’s tempting to think we now have a be-all end-all solution that covers all the bases. However, as with everything else in analytics, the native scroll depth trigger does require customization to provide you with relevant information about your content and the visitors interacting with it.

In this article, I’ll explore some tricks that you might find useful when customizing the scroll depth trigger.

1. Variable percentages depending on page

The easiest customization you can make is to track different percentages depending on the page in question. For example, on article pages in my blog I might be interested in tracking in increments of 25% of vertical depth scrolled. But on list pages and summary pages I might only be interested in knowing who scrolls down to the bottom.

For example, here’s a Custom JavaScript variable that does what I described in the first paragraph of this chapter.

Then you can just add this variable to the trigger like so:

You don’t have to use a Custom JavaScript variable. I’m quirky in that I prefer to use it, always. But you could just as well use a RegEx Table variable to achieve the same thing:

This is a simple customization, but it does allow you to measure relevant metrics for pages where it makes sense.

2. Only fire the scroll depth trigger on relevant pages

This should be a no-brainer, too. It might make sense to have the scroll depth trigger fire your tags only on pages where you are genuinely interested in scroll depth tracking. For example, I’m actually only interested in knowing how far users scroll on my blog pages and nowhere else. Thus I could make this simple modification to the trigger to delimit its firing capabilities:

A very simple modification but helps you collect only meaningful data.

As you can see, there’s no “Enable when…" option on the Scroll Depth trigger, similar to what you might see with a Just Links trigger, for example. Thus you might be tempted to think that there’s no way to prevent those pesky gtm.scrollDepth events from populating the dataLayer on pages where you are not interested in tracking scroll depths.

However, there’s a very easy hack to make sure the trigger doesn’t push anything to dataLayer. Just set the percentage threshold to 101. It’s impossible to scroll to 101% length of the page, so by setting the threshold to this you’ll deactivate the trigger, effectively.

Thus you could modify #2 above by putting the following Custom JavaScript variable into the Percentages field of the trigger:

3. Only fire tags on pages where thresholds are not auto-collected

One problem with the Scroll Depth trigger is that it doesn’t care if the page is long or short. If you have a very short page, it’s possible that all the thresholds are met when the page is loaded, which leads to a bunch of gtm.scrollDepth events pushed into dataLayer, firing your tags even though the user never scrolled!

Luckily there’s a nifty trick we can use to fight this. We can prevent the Scroll Depth trigger from functioning on pages where the ratio between browser viewport height and page height is too high. The browser viewport is the area of the web browser that is filled by your page. The page itself is the entire document, parts of which are likely to be invisible below the fold of the viewport.

So, if you want to only fire the trigger when the user actually scrolls to 25%, 50%, 75%, and 100%, you need to make sure the ratio between the visible viewport height and the page height is less than 0.25. This means that less than 25% of the page is visible in the browser viewport.

To do this, you need to create a Custom JavaScript variable that looks like this:

First thing you’ll need to do is edit the verticalScrollDepths variable to reflect the list of thresholds you want to track if the page passes the ratio check.

Then just add this to the “Vertical Scroll Depths” field and you should be all set.

Now the trigger will only fire in cases where the page is long enough to make sense for your tracking.

This is a bit trickier, but still doable with some JavaScript magic.

The way to make this work is to first calculate the height of the HTML element that contains the content whose scroll depths you want to track. Then, you need to check how far from the top of the page this element is. Finally, you need to tell the Scroll Depth trigger to track pixel thresholds that correspond with the desired depths of the content element, and add the distance to the top of the page to those numbers.

I think it’s easier to illustrate. 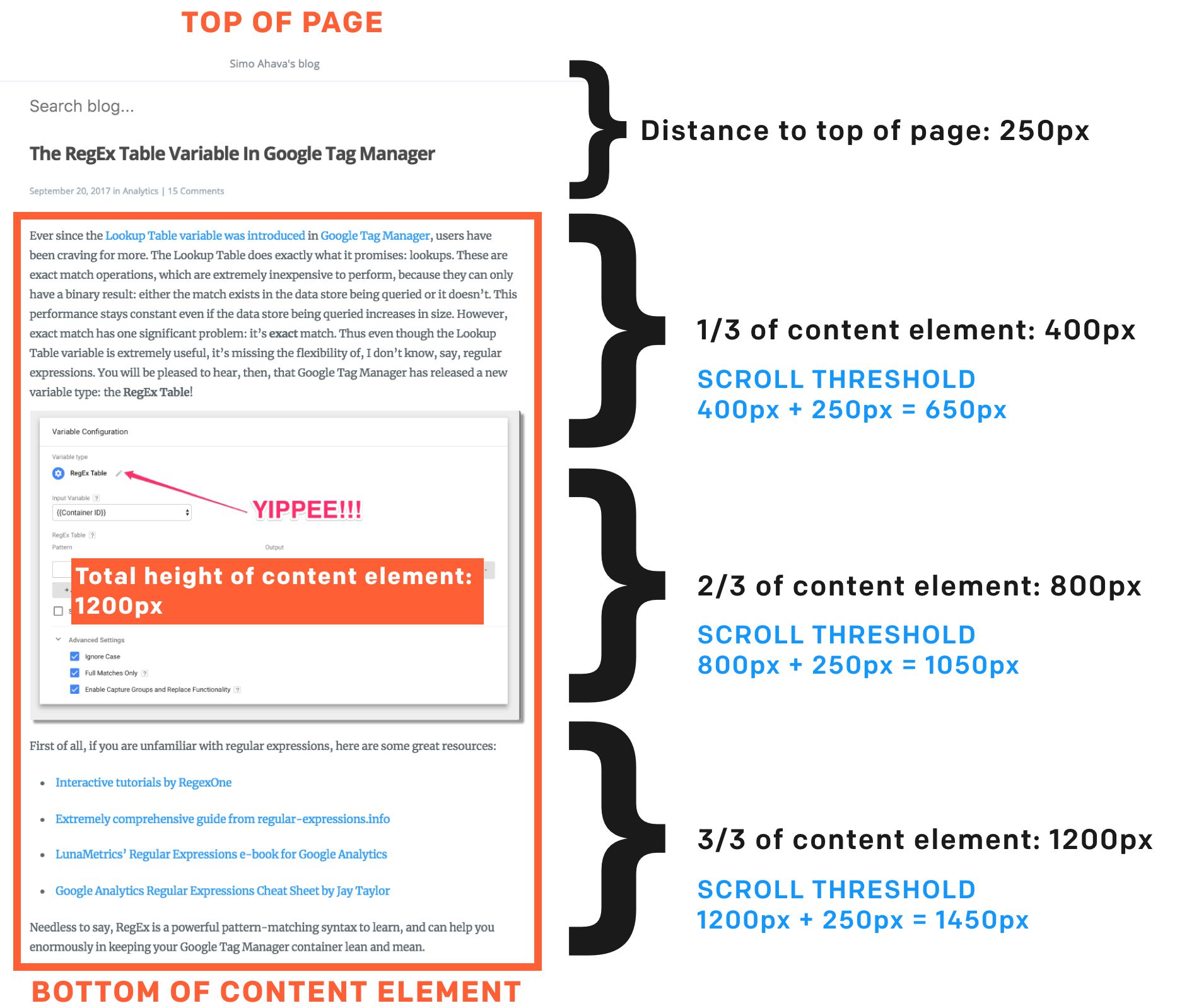 Now, since we don’t want to hard-code these into the trigger, as that would lead to a horrible mess to manage (every single page would need its own trigger), we can use a Custom JavaScript variable to dynamically calculate the pixel depths.

You’d then need to add this variable reference to the Pixel field in the Vertical Scroll Depths selection of the trigger:

With this workaround, you can get more meaningful measurements on pages which have lots of different content areas filling up the real estate of the document itself.

Getting the percentage is actually a bit of a hack. The problem with the Scroll Depth trigger is that it’s initialized fairly early in the page load, often before DOM Ready and any dynamically injected content is added to the page. This means that the thresholds of scrolling might be smaller than what the percentages actually would reflect.

This is, unfortunately, unavoidable right now. The Scroll Depth trigger has no options to delay its initialization until such a time as the content is completely loaded.

What this also means is that any variables you use to determine the height of the content and, subsequently, what the respective percentages actually reflect, can change from one trigger event to the next. Thus, in order to get the actual percentages used by the Scroll Depth trigger, we’ll need to do something that I’ve repeatedly instructed to avoid at all costs: implement a side effect in the Custom JavaScript variable.

Basically, we’ll need to store the scroll thresholds in a global variable when the Custom JavaScript variable is first run. After the initial run, we’ll always pull whatever was stored in the global variable instead of generating a new set each time the variable is invoked. This way, any triggers and tags that use the thresholds will always access the same values, even if they might be off a bit from what the content thresholds actually are.

As you can see, we populate a global variable window._gtm_scroll_set with an object that contains two properties:

This Custom JavaScript variable checks which threshold was returned by {{Scroll Depth Threshold}}, and returns the respective percentage value.

The order of things is thus:

Note that even though I am introducing a side effect in the Custom JavaScript variable, it is mitigated by checking if the global variable has already been set. Thus the typical downside of side effects (constantly and unpredictably updating global state) is mitigated.

It’s not perfect - nothing that impacts global state ever is. There’s always the risk that some other JavaScript accesses and modifies window._gtm_scroll_set, which would break your setup.

These four tips ranged from the really simple to the moderately complex.

There are many ways in which you can customize Google Tag Manager’s default trigger. With the scroll depth trigger, these customizations are almost necessary, because the trigger itself is lacking in some critical configurations options for now.

For example, I would like to see the following features in the trigger:

With the tips in this article, you can do plenty, but especially the feature where you could reset the trigger is sorely missing from the current implementation.

Do you have tips you want to share for Google Tag Manager’s Scroll Depth trigger?