A very recent addition to Google Tag Manager is the Format Value option in all of GTM’s variables. With Format Value, you can modify the output of the variable with a number of pre-defined transformations.

This is extremely handy, because you no longer need to create Custom JavaScript variables whose sole purpose of existence it to change the output of other variables to lowercase, or to change undefined values to fallback strings (e.g. (not set)). 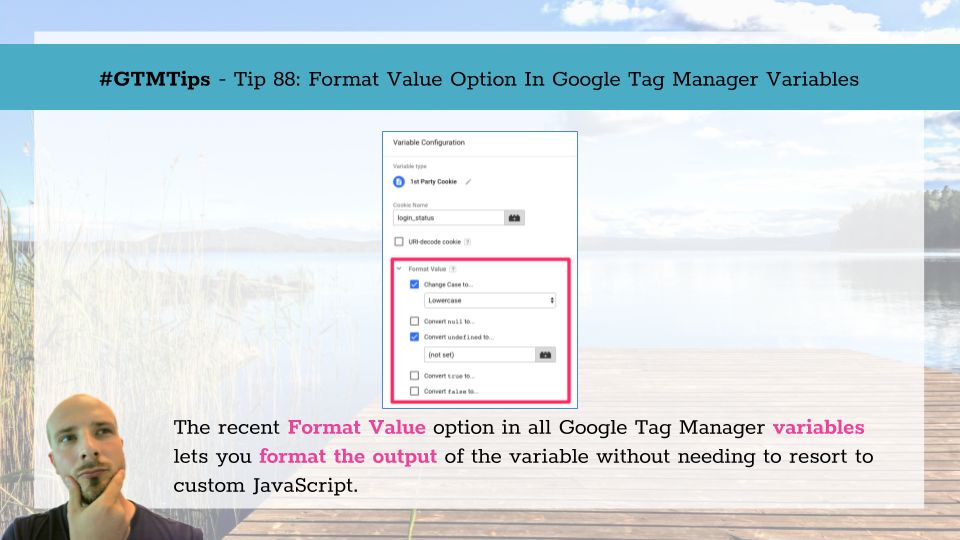 When you create or modify any variable in GTM, you now see a new option at the bottom of the configuration screen. The option is titled Format Value. By expanding it, you will see the following options:

So how is this useful? Well, take the Case conversion as an example. By forcing the variable output to lowercase, for example, you can normalize all the following strings:

With Case conversion set to Lowercase, the output of all the three strings above would be "i love gtm".

Normalization is absolutely vital in tools such as Google Analytics, which treat each case format of any string as unique and distinct from the others.

Being able to convert falsy values such as undefined, null and false to string representations is handy, too, since you can now use something like "N/A" or "(not set)" to represent situations where the variable did not return a proper value. Again, in Google Analytics this is relevant, because GA drops undefined fields from hits.

The Format Value option is a very useful addition to Google Tag Manager’s arsenal. I only hope the number of available formatting options is increased in the future, perhaps even allowing us to write simple anonymous functions directly in the UI through which each varible output is passed.